We hope you enjoy a sneak peek

… behind the scenes and seams!

established a partnership and process that, to date, has raised $9,056.53 for wildfire recovery aid. 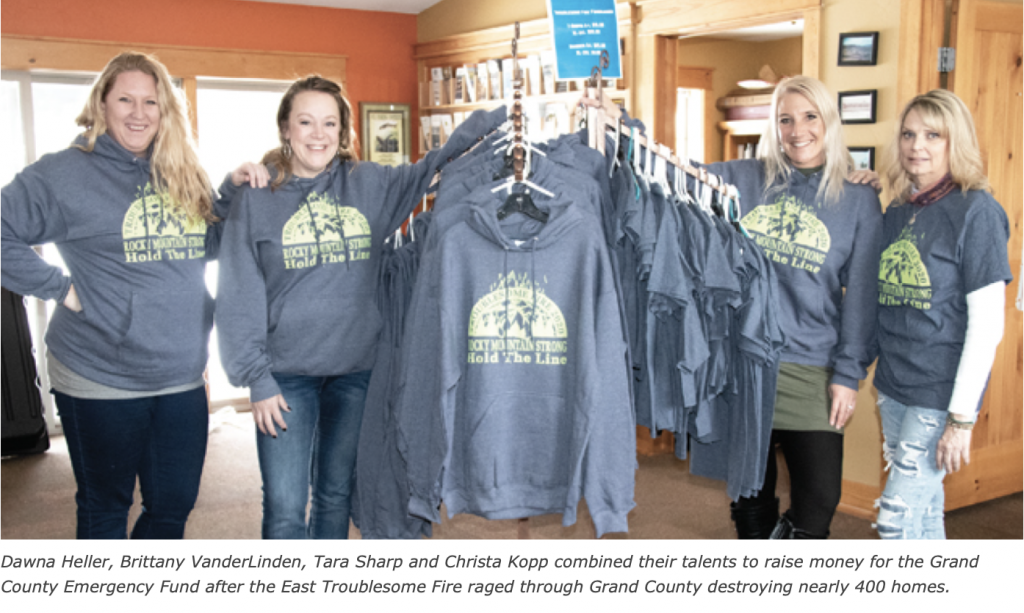 Courtesy Grand Gazette: The printed tops have been shipped as far as Virginia, Alaska, and Hawaii. And for nearly every shipment, a story has been told, a memory has been made, and/or a connection has been created. The women say that they have heard many sad stories and that both wildland firefighters and other fire victims have bought the items to support other victims. They report lots of support from Estes Park, which was not only threatened by the East Troublesome Fire, Colorado’s second-largest wildfire in history, but by the Cameron Peak Fire, the first-largest, at the same time. One individual special ordered polos for their entire office staff.

And one gentleman’s wife was ill at the time he ordered, so VanderLinden started checking in with a weekly phone call. She is still checking in, nearly four months later and subsequent to his wife’s passing.

“It has been amazing to see the community come together,” said Sharp.

“Everyone has been really generous with their donations,” Heller noted, “but they’ve also been very patient with the process, as we were trying to figure things out. They’ve been super gracious and just want to help.”

The project has already donated $5,000 of the monies raised to the Grand County Wildfire Emergency Fund, being managed by the Grand Foundation and fully dedicated to supporting Grand County residents impacted by fire-related loss.

They hope to round the total raised up to $10,000 through additional sales and donations and by, perhaps, a donation from the Chamber itself.

Emergency Fund monies are being used to aid citizens with such immediate necessities as shelter, food, debris removal, and reseeding. Other potential needs, such as short-term rental assistance, or longer-term flood reduction efforts, water quality support, reforestation, and mitigation assistance to nonprofits and fire departments are being carefully considered, on balance with the limited funds and large needs in the community.

As the tee-shirt and hoodie stock gets smaller, the group has shut down online sales, but will continue to take phone orders and sell items at Chamber events, while supplies last.

Tee-shirts cost $15 with $10 going to the recovery fund, and hoodies are $25 with $15 being donated. Additional funds are used to pay for the clothing and shipping costs and materials. All time is being donated with full hearts.

Finally, the team of women emphasize that 100% of the Wildfire Emergency Fund goes directly back to victims of the East Troublesome fire.

To learn more about the Grand County Wildfire Emergency Fund or to donate directly, go to www.grandfoundation.com/Give/Wildfire-Fund. To support the cause and get your own tee-shirt or hoodie, call the Kremmling Area Chamber of Commerce at 970-724-3472.

Get a quote or ask a question!
Scroll to top